Deploying artifacts on Cloudbees with Gradle

I use Cloudbees for Java application development using git, Jenkins, Tomcat and the Maven repositories. Everything is nicely integrated until I start working with Gradle: when creating a Maven job, Jenkins has a special post-build action to deploy the artifacts onto Cloudbees’ private repositories: 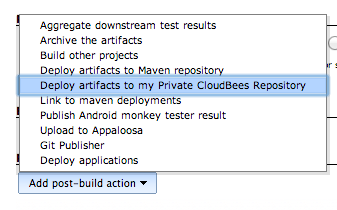 Unfortunately this item is no longer here in a Gradle project:

My solution has been inspired by many internet readings, especially the one from AppSatori.

What do I want?

Basically I wanted to have the artifacts of a multiple project Gradle job to be deployed automatically on my Cloudbees’s snapshot repository. I also have some more requirements:

Maven-publish is the new way to deploy Maven artifacts but as Cloudbees uses WebDAV which is not (yet) supported by maven-publish the maven plug-in was the only choice.

In order to enable the artifact deployment we need to add some configuration instruction in the build.gradle of the project we want to deploy.

In order to deploy an artifact on a Maven repository you need to define the group, the artifact id and the version. This could be done as follow:

I didn’t explicitely defined the artifact id which will defaults to the gradle project name.

We need to add a dependency to support the WebDAV operations. We are creating a specific configuration in order not to mix the deployment dependencies with the regular ones:

The mavenplug-in uses the uploadArchives to deploy the artifacts onto the repository the configuration will be the following:

This configuration will be working but there a need to supply the credentials to make it work. AppSatori choose to put those credentials directly in the build.gradle file by adding at the beginning:

This is working but I don’t like it as it requires to have the password pushed onto the git repository.

Jenkins supports the injection of passwords when running the grade script. To do this you have to install the EnvInject and then activate Inject passwords to the build as environment variables in the Build environment section of you job configuration:

At this point you have two options: using global passwords defined in Jenkins configuration (Mange Jenkins and then Configure System) or use job defined passwords. I choose the global ones as this enables me to share this configuration between jobs.

Doing this we have a username/password configuration which no longer needs to be pushed onto the git repository making it possible to change the credentials without touching the source code. Another nice thing is that Jenkins takes care of removing the password in the log pages.

The last step is to bridge the system properties injected by Jenkins with the Gradle variables. Quite easy to do:

At this point you have a working build file and you can use it by adding the uploadArchives task either in the build phase or as a post-build phase and everything should get deployed on your Cloudbees snapshot repository.

The next step will be to use the deployed artifacts from another project. This is is quite straightforward by adding a new Maven repository:

Of course you’ll also need to add the system property to gradle bridge in this project too. And voilà it works from Jenkins.

If you build your project outside of Jenkins it won’t work as the credentials are not injected. The lazy approach would be to manually add -DcloudbeesUsername=my.username -DcloudbeesPassword="You'll never find me" to the command line when running gradle. You’ll also need to tell your IDE to add those options to the build command line too. This will be working but I discover that IntelliJ was adding those options to a configuration file that will be committed to git.So I went for a another solution.

I just created a cloudbees.gradle file in $HOME/.gradle/init.d with the following contents: